Among the loose black and white prints I found a set of re-photographed Civil War pictures. They are kind of fuzzy and dark, but a little cleanup can restore the contrast wonderfully. I don't know who took them or where the original photographs were found.

First, here is a picture captioned "Group of 21st Iowa Infantry Volunteers." The fine print reads "Photo with Battle Flag at Dubuque, June 4, 1879. The Regiment was organized at Dubuque August, 1862." 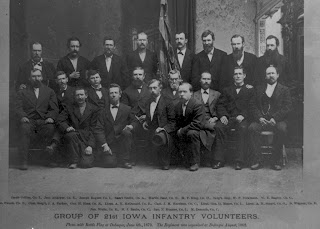 The man in the upper right appears to be W. E. Bagley, Company C. I think he must be Dora Bagley's father, or my great great grandfather on Richard Armstrong's side. 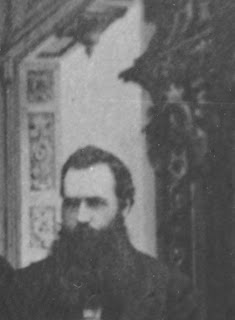 My grandmother Marcella could not read the caption on the re-photographed picture that indicated who was who; on another copy of the group shot she wrote on the back that Richard Armstrong's grandfather was "in there somewhere." I can't read it with my naked eye either, but the scanner can magnify it enough to read:

There were also are some additional photographs of portraits. I presume there was some evidence that they were of the same man, but I don't have any documentation to back that up. Here are the portraits of the man who might be W. E. Bagley. I'd guess these were taken closer to 1862 than to 1879, but I don't have an exact date. 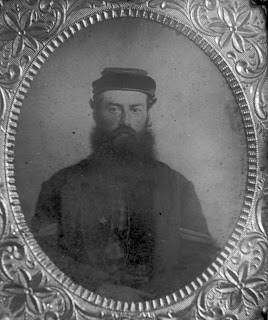 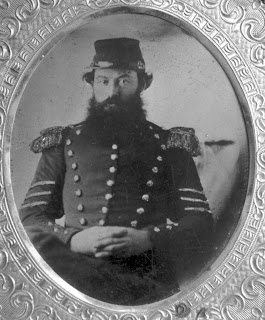 Here is a group shot taken in camp, presumably within a few years of 1862. It is unfortunately pretty blurry. 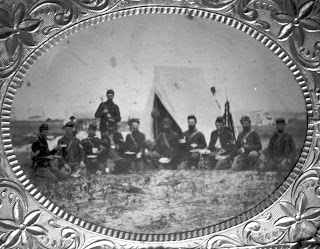 I've zoomed in on the blur that I think might be W. E. Bagley:

And last, another group shot, undated but perhaps taken a decade or so later than the other group portrait, maybe around 1889. It seems to show most of the soldiers in the first group shot. 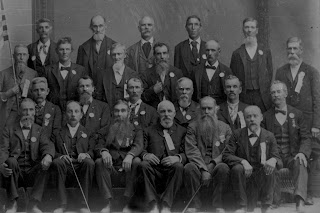 I've again zoomed in on the man I think might be W. E. Bagley. 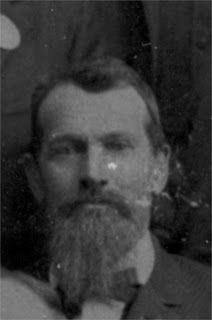 I chose this one in part by a process of elimination; I was able to pair up most of the men to a fairly high degree of certainty with their images in the earlier group portrait. But it is hard to be certain when the portraits were taken years apart, and so much of his face was covered by hair! The second man from the right in the bottom row is also a possibility.

I will keep a sharp eye out for any further information about W. E. Bagley. It seems unbelievable to have both Revolutionary War and Civil War soldiers in my ancestry!
Posted by Paul R. Potts at 11:05 PM