An Album in Progress 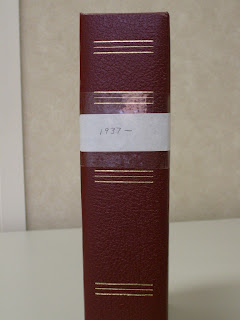 My mother was apparently assembling an album out of loose photographs. By "loose" I mean some that seem to have never been stuck into albums, and some that seem to have been torn out of black paper albums. The black paper albums are not archival -- in fact, they are acidic, so removing the photos should be considered a good thing, except that they were glued in and removing them left a mess.

The new album -- one of the "magnetic" kinds with sticky pages -- is not safe for long-term storage of photographs. The adhesive on the pages is nasty on the photos, and the paper is acidic. The pages are visibly yellowing already. So, for preservation purposes, they have to come out. 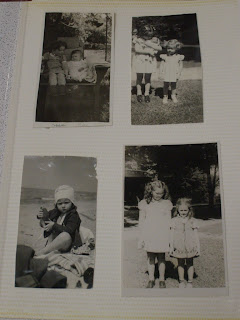 Fortunately, most of them were loose. A handful of them had been attached with (cringe) scotch tape to the album. There was nothing to do for those but tear off the tape as cleanly as I could, which was not all that cleanly.

So, we have in some cases prints which had notes written on the back, which were then glued to black paper, then torn off the black paper. Sometimes additional notes were written on the back, or somethings on the front. A variety of different inks were used, but most often ball-point pen ink, which is destructive and eats through photographic paper. Then some of those had scotch tape attached. It also looks like in many cases the prints were cut, by hand with scissors, sometimes unevenly, to fit album pages. Even some instant prints (the kind filled with chemicals) were cut. In some cases the cutting wound up indiscriminately cutting off or cutting in half some of the explanatory text written on the back of the prints. I can only grit my teeth and sigh. The end result is that some of the notes on the back are now completely illegible.

Family photos have a hard life! 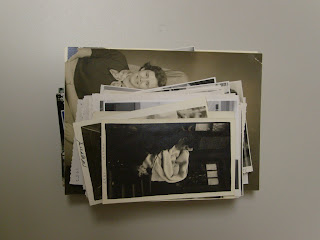 I have not decided where they are all going to wind up -- they will go back into the sorting process with the rest of the loose photos and then get scanned. They would have survived better in a loose pile in a shoe box than in these multiple albums. I don't want them in a pile, though, because the leftover black paper and glue and ink and tape residue on the backs will be in contact with the fronts of their neighbors. So they should go into albums again, or into boxes. I think we can do it a little better this time, but they will not last forever no matter what I do.

In case my mom's ordering winds up being important to date or otherwise contextualize the pictures, for reference I took a series of 1-megapixel pictures of the pages as they were laid out in the album. Then, while I was at it, I took a 1-megapixel picture of each picture. The album went in the trash. The pictures are going to get sorted with the others, and scanned. and then put into what I hope will be a better home.
Posted by Paul R. Potts at 3:45 PM