Making Sense of the Prints

So I've learned a few things about sorting prints -- often times, their backs, not their fronts, hold the clue to dating and placing them.

I've got several hundred prints with nearly identical corrugated edges, printed to nearly identical gray tones. But what isn't identical is a stamp on the back that seems to be a stamp used by the printer. It isn't just the number that is unique, but the ink, color, and even the placement of the numbers on the back of the prints. It then becomes a jigsaw puzzle. 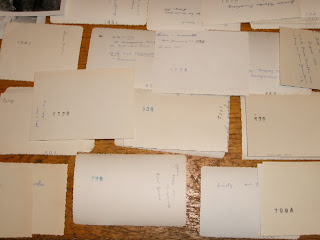 Even photos that have been cropped, glued down into an album, and torn out of an album, some kept in the dark and sum exposed to the sun -- if there is a fraction of that stamp there (in one case, even a tiny speck of the purple ink in the same approximate position), I know it belongs to a particular batch for printing. And then if even one of the prints in the same batch is dated, or has a place reference, I have some additional clues as to where it came from.

This is a significant help because this helps me make sense of prints that come from something on the order of _sixty_ similar-looking batches. A neat trick! And so large swaths of the collection start to fall into place.

This is my work surface for sorting these prints. 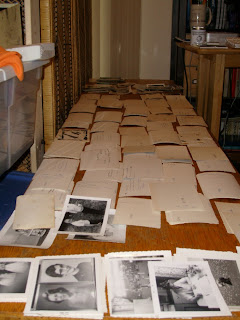 I could easily make good use of five or ten times this much space!
Posted by Paul R. Potts at 8:29 PM