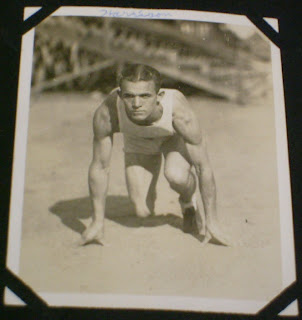 I came across this tribute to Henry Harrison Clarke, my grandmother's brother. It comes from the September 27, 1995 minutes of a University of Oregon's Assembly Meeting. If you went to high school during the 1970s or 1980s and had to undergo mandatory physical fitness testing, my great-uncle was responsible!

Mr. Louis Osternig, Exercise and Movement Science, was recognized to read a memorial for Mr. H. Harrison Clarke, Emeritus Professor of Physical Education. Mr. Clarke was on the faculty of the University of Oregon from 1953 until his retirement in 1974. Mr. Clarke passed away in Eugene on June 8, 1995 at the age of 92.

H. HARRISON CLARKE
June 30, 1902 - June 8, 1995
Henry Harrison Clarke, Professor Emeritus of the former College of Human Development and Performance, died of age-related causes on June 8, 1995 in Eugene, Oregon. He was 92 years of age.

Born on June 30, 1902 in Tidioute, Pennsylvania, a tiny town on the Allegheny River in the northwest corner of the state. He left this small corner of the world and rose to international prominence in the field of physical education as a teacher and researcher.

Starting his academic journey in 1931, H. Harrison received his master's degree from Syracuse University, Syracuse, New York. In 1940, he completed his doctoral studies at the same university, obtaining a Doctor of Education with an emphasis on tests and measurements in physical education.

H. Harrison's career path lead to an associate professorship at Syracuse, an appointment as a major in the Army Air Force Personnel Distribution Command during World War II, and positions as graduate studies director and physical education professor at Springfield College, Springfield, Massachusetts.

In 1953, H. Harrison arrived at the University of Oregon; and until his retirement in 1972, he devoted nineteen years to physical education research and teaching. He taught graduate students developmental physical education, elementary and advanced statistics, research methods, experimental design, and laboratory techniques.

Examining muscular strength and endurance and conducting the well-known Medford, Oregon, Boys' Growth Study formed the core of H. Harrison's research. The Medford study started forty years ago in the 1955-56 academic year and continued for twelve years. During this time, H. Harrison and his colleagues periodically tested eight to fourteen-year-old boys in the Medford public schools. The measures included such variables as physical and motor traits, mental abilities, sociability, and psychological and emotional factors. Many physical educators view the Medford study as a major contribution to their profession.

During President John F. Kennedy's administration, H. Harrison received an appointment to the President's Council on Physical Fitness and Sports in 1962. He served as Chairman of the Committee of Research Consultants and the Physical Fitness Research Task Force. H. Harrison continued working on the council for many years as a research consultant. For many years, he was also an active member of the American Association for Health, Physical Education, Recreation, and Dance.

In 1984, H. Harrison received the Distinguished Service Award from the University of Oregon.