Here's another picture taken from the small album of cyanotypes, from around 1895-1900.

The first one shows, I think, Isabel Bucklin's brother Henry Harrison Bucklin; the caption reads "Time to Laugh." This fits the general theme of the cyanotype album, which is upbeat and silly. 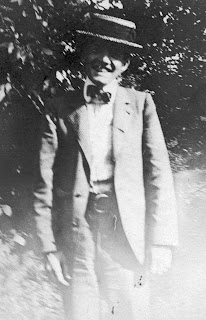 That is likely Isabel Bucklin's handwriting, although I don't know that for certain. The album is full of her friends and relatives, most of whom I can't identify. Fortunately, she provided an "answer key" page in which she identifies people who appear in the photos. Here's what that page looks like: 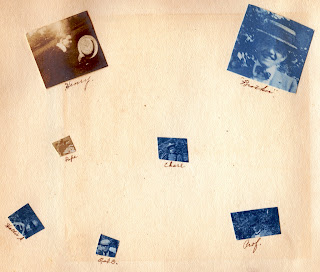 And here are closeups on the little thumbnails: 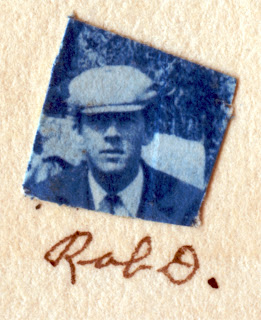 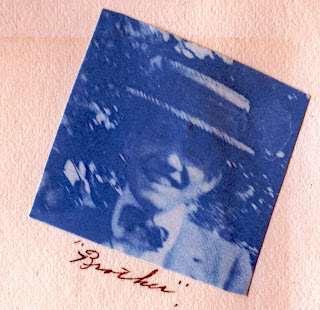 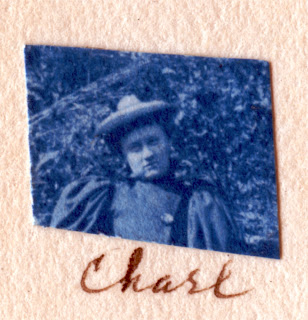 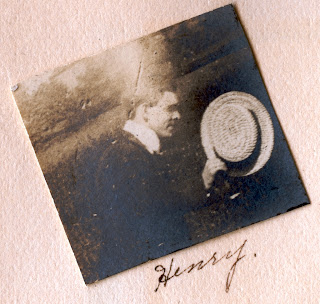 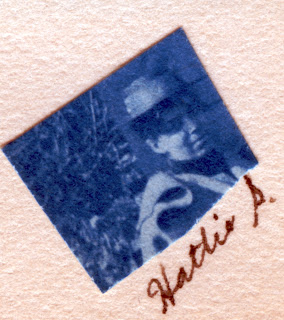 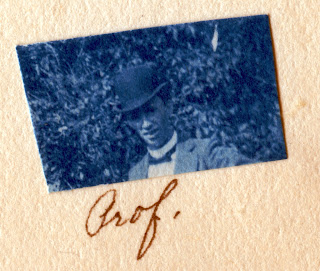 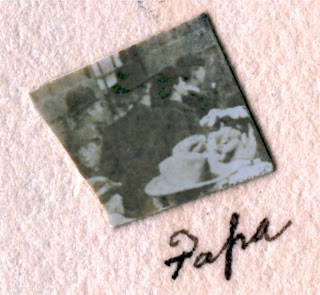 Is this last one really a photograph of her father? It looks like the back of someone's head in a crowd. I still don't know who most of them actually are, and of course her answer key doesn't cover the relatives that appear in the cyanotypes. So we'll have to introduce a few more characters. To help figure out who is who, here is a piece of the family tree (click on it for a bigger version):

This tree shows several generations of the Isabel's Bucklin ancestry. Of particular interest here is that her father, William Decature Bucklin, had another wife: Hannah Bucklin (McCue). From that branch come three more people that feature in the photographs: Ella, Maude and Marshall Bucklin. One of Hanna's sons with William Decature Bucklin is Cornelius Penn Bucklin; he is Isabel's half-brother. Maude and Marshall would be Isabel's "half-niece" and "half-nephew," or the children of her half-brother, the grandchildren of her father. Cornelius Penn Bucklin was 18 years older than Isabel, which made it possible for Maude and Marshall to be close to the same age as Isabel rather than a generation younger.

I know very little about Ella, Maude, and Marshall. There may be further information in my grandmother's journal or papers that I haven't gotten to yet. However, I do have pictures of Ella and Maude: 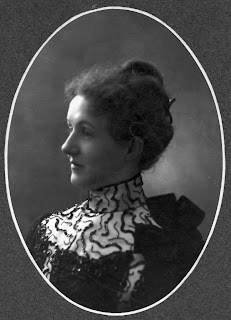 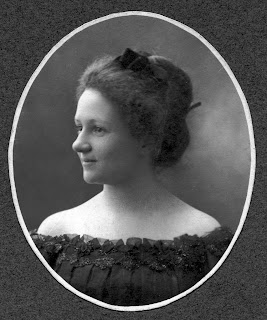 They are obviously closely related! I have not come across a portrait of Marshall, but he does appear in the cyanotypes in some group shots. We'll have to figure out which one he is.

On a melancholy note, a note on the back of Maude's portrait says that she died at Allegheny College, but I don't know when or how.

I was able to find a Social Security death notice for a "Marshall Bucklin" born March 1st, 1893, who died June 1967 in Warren, PA. There is no guarantee, but since Bucklin is a rare name and Marshall also relatively uncommon, this could be the Marshall Bucklin in question.