John Bucklin is the son of Harrison Bucklin (Isabel Teresa Bucklin's brother) and Henrietta ("Aunt Etta") Bucklin (Hoffman). This makes him him Marcella Armstrong's first cousin. John married Hazel (I don't know her maiden name). I am not sure if they had any children or not (there are none that I know of). According to my grandmother's records, John died in 1981.

Here is Hazel. I don't have a good date for this picture, but it could be around 1950. The original was very overexposed, taken in bright sunlight; I didn't even realize there was a dog in the picture, since it was hidden in the deep shadows, until I did some adjustments! The image shows a very "bimodal" distribution; I can bring down the highlights and bring up the deep shadows, but there just isn't all that much data in between to spread out in order to provide some gray tones in between. I took a shot at fixing it with Aperture, although I may be able to do a better job with Photoshop later. 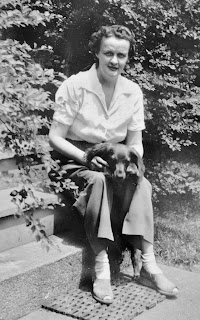