I have one portrait of Isabel and her brother Harry along with an older woman; the writing on the back, in Marcella Armstrong's hand, claims that this woman is "Cousin Rhoda Bucklin." 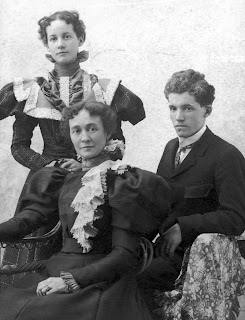 Who is Cousin Rhoda? Well, I am not positive, but in my family tree if you go up a generation from Isabel, her parents were William Decature Bucklin and Clara Elizabeth Bucklin (Shearer). We already know about the Hannah Bucklin (McCue) branch of the family. There aren't any Rhodas to be found there. If we go up one more generation, William Decature Bucklin's father was Parker Bucklin and his father was Minerva Bucklin (Hazen). (Parker Bucklin also had another wife, but I have no record that they had children together). Anyway, there are some Rhodas there:

However, Rhoda Parker would have been a great-grandmother to Isabel, not a cousin. It is interesting that perhaps Parker Bucklin was given his mother's maiden name as his first name. The other Rhoda, the daughter of Rhoda Parker and Francis Drayton Bucklin, would have been of Isabel's grandparents' generation, and although I don't have dates for her, it seems likely that she would have been too old to be the woman in the photograph.

Instead, I suspect that the Rhoda in question is the daughter of Parker Bucklin's brother Francis Keyes Bucklin (1810-1865), Rhoda A. Bucklin (1857-1931). You go up two generations, across one brother, and down, so I guess that is a second cousin.

If you assume that the photograph above was taken around 1895, putting Isabel's age around 15, that would have made Rhoda Bucklin about 38. Is it possible that the seated woman in the photograph is 38? Or is she yet another Rhoda Bucklin that I haven't found documentation for? In the absense of more rigorous documentation this should all be considered highly speculative!
Posted by Paul R. Potts at 11:23 AM