Last time we figured out who most of the children were in a family portrait of an Isabel in 1907 (she would have been about 27 and Marcella would have been about 3). Let's see if we can identify the older adults. The caption mentions 3 names, "Cousin Rhoda," "Aunt Etta," and "Aunt Celia." These annotations are in my grandmother's handwriting.

After some head-scratching, I think I am pretty certain which one is Cousin Rhoda. Recall that I have a portrait of a somewhat younger Rhoda Bucklin. I think this is the same woman, about 12 years later. Look closely at the shape of the nose and chin. 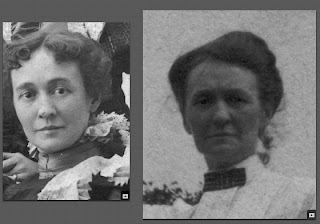 I also have a good lead on Isabel; I have a formal portrait where she looks very similar: 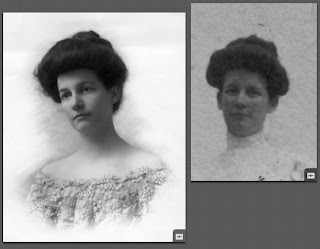 OK, now they get harder. Recall that I had an earlier extremely faded portrait containing several faces that I was unable to conclusively identify. Could this be Etta (Henrietta), Harry's wife? Oh, yes, I think it could! 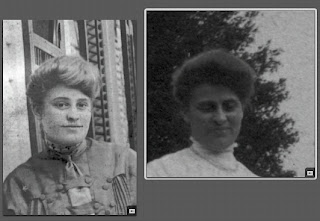 Hmmm, then could this be Aunt Celia? 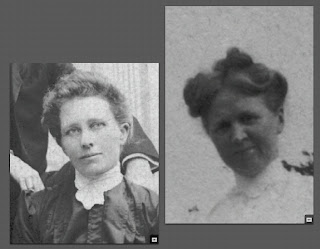 Well, that one is slightly tougher, but I think it's the same woman. Look at the lips and ears.

If it is the same Celia Bucklin as the only Celia Bucklin listed in the Bucklin Society database, that would mean she was born on June 1, 1855 and died on May 5, 1942, the child of Francis Keyes Bucklin and Laura Ann Wilcox. That would make her the sister of Rhoda A. Bucklin 1857-1931, another second cousin to Isabel.

Unfortunately there are several people remaining that I can't identify. I don't know who this man is, standing next to Isabel; it doesn't look like either brother Harry or husband Henry, and her father died young. And there are a few other people I can't identify. I'll talk about them next time.
Posted by Paul R. Potts at 10:02 PM